A nostalgic trip to Glencolmchille!  Just the place for nostalgia for nothing much changes from year to year.  Only the cottage in Malin Beg where we first stayed and watched the shooting stars of August Perseids in the pitch dark night 20 years ago, has fallen into ruins.  The Old Rectory, our next lodgings, hasn’t fared much better.  Our grand daughter chased dinosaurs through the giant ferns but now the house looks derelect and jurassic park is more overgrown than ever.

It’s a special place this glen, a holy place.  When the christian Patrick, a foreigner, drove out the druids(along with the snakes!) the old ones took refuge in this glen.  Patrick couldn’t, or didn’t bother to, expel them.  It took Colmchille (so the story goes), half a druid himself and a son of Donegal, to best the druids at their tricks and banish them to Carraig an Deamhain, Demon’s Rock, which looms barren and ominous, just off the shore.  And maybe they are still up to their wicked deeds for there have been an inordinate number of shipwrecks round these treacherous coasts.

Local people bury the drowned sailors, when the are washed up, pray for their souls, raise crosses and memorials to their memory and on 9th June each year (Colmchille’s feast day) pilgrims walk several miles through the glen round the ancient stones.  Some stones have crosses incised on them but others have strange spiral markings which date to a time before Christianity came and claimed them for herself.

Today not so many people complete the pilgrimage but in more devout times it was customary to begin at dawn and make the penitential journey on bare feet through bog and over rough ground and sharp stones. The druids on Carraig an Deamhain must be gnashing their teeth.  And maybe they are only biding their time and muttering ‘Tochfaidh ar La’ for the prayer of the people, which surely keeps them at a distance, is weakening and their friend the celtic tiger which they have subtly befriended looks set to return.

In the craft village we hear French, Spanish, German and American voices.  How do all these people know about this remote place?

We found a more remote one which had no foreigh, or any, visitors!

An Port – Port the sign post said and we turned left to investigate – Barry said he had fished there once. He remembered a deserted fishing village at the end of a narrow winding road that ran for ten miles through the hills and across the bog before dropping to the shore.  The tarred road soon deteriorated into a track with grass growing up the middle. Sheep with black faces, curly horns, little black feet and smudged knees as if they had been kneeling in the bog, cropped the verges.  They protested at our intrusion and unwillingly condescended to move out of the way.  The road dropped into steep ditches on either side.  If we met oncoming traffic there was nowhere to go except into the ditches which would no doubt have delighted the long-faced sheep who were keeping up their loud protest.

But there was no traffic and no people.  And then we came upon a few scattered cottages – old ones, no modern bungalows here, but still inhabited.  Who lived in this remote spot and how did they make a living?  We saw a tractor and prayed it wasn’t coming our way but it turned into one of the houses: then a parked van and two men stacking turf, and a lone man on top of a hill outlined against the sky, jumping from rock to rock.  We heard a whistle, spotted his dog below and realised he was a shepherd gathering his sheep. If they could talk they would surely lodge a complaint about us.

Port is no more than an inlet and a tiny jetty. There is nothing there except one lonely rowing boat pulled up on the stones – ‘Mairead, Sligo’ the faded lettering tells us and it hardly looks sea worthy.  People used to brave the Atlantic in craft not much bigger than this. The ruins of a clachan of houses crumble on the hillside and broken stone walls suggest that there must once have been something here worth enclosing.  When did the people leave?  Is it deserted since famine times or did they go to look for an easier life in a less isolated place?

There is a strange desolate atmosphere.  We are on the wrong side of the mountain to catch the evening sun and just off shore the other side of Carraig an Deamhain looms in shadow, dark and forboding.  Could it be that just maybe some of those old demons have crept back?

I am glad to get in the car and drive back to Glencolmchille which the evening sun is still lighting and warming! 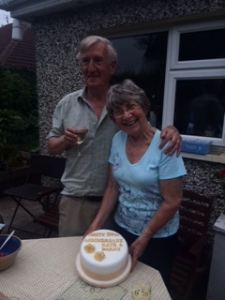